My name is Simon Xie, and I created the XM World e-Drums company back in 2004. XM is one of only two companies worldwide that solely focuses on producing electronic drums, but our competitor only has one drum kit, whereas we have a large number of options ranging from beginner’s sets to elaborate expert kits. Let me give you some insight into the history of XM World.

The History of XM World

I started playing drums when I was 17 years old. Strangely enough, it was in a marching band at high school. I think I arrived late for choosing an instrument, and subsequently played the cymbals for 3 months. Needless to say, it wasn’t the most auspicious start to my experience with drums!

By the time I was 19 years old I was playing drums for a rock band, which we formed in college. We played for several years and even entered into some ‘Battle of the bands’ competitions in Taipei, Taiwan, and we won! I played a New Sound drum kit, which is very famous in Taiwan. Essentially, it was made in the same factory as world famous drum producer DW, but had a different logo stuck on it for the local market.

When I first played an e-Drum, I didn’t like the experience at all. They didn’t look good, and more importantly, they didn’t sound great either. After leaving the obligatory Taiwanese army program when I was 27 years old, I started my first job as a drumming teacher. I taught both in schools and privately for 2 years before deciding to create an e-Drum company, of which I have always been the principal designer.

I used to live in a small Taiwanese apartment in the city, as is the situation for the majority of Taiwan’s population. I couldn’t play drums loudly, as my neighbours would rightfully get upset, which meant I had to teach my students on e-Drums in conjunction with headphones. If you live in a major city around the world, you could probably empathise with my situation.

I bought and sold Roland and Yamaha electronic drum sets to my students, but my pupils just didn’t like the look, sound, or feel of those digital drums. The general consensus was clear – they wanted electric drums that looked and played like real drums. So, it was for drumming education purposes I first decided to embark on the quest to assimilate real and digital drums into a single working system.

When I was 28 years old I began trying to create a new e-Drum. I had already studied Mechanical Engineering at the National Formosa University for 5 years, so this decision wasn’t taken out of context. However, the process was very difficult, and I soon found myself needing to create a team, which most importantly involved sourcing an Electronics Engineer. By the time I was 29, the first XM electric drum set was born. I called it ‘XM’, because my last name is Xie, and this was my ‘model’. 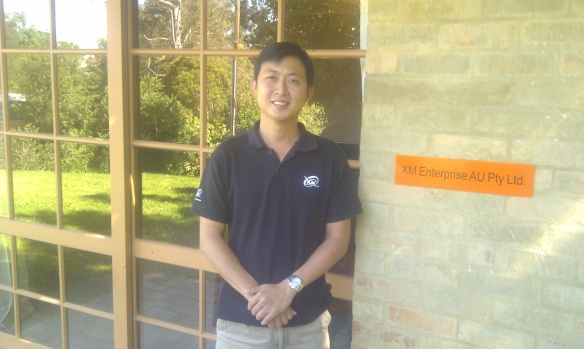 The Evolution of XM Electronic Drums

Since those early days we have now created over 40 different e-Drum sets, improving on models each time. We have always been very conscious of the competition’s designs, but we didn’t want to copy them. Our goal has always been to compete with Roland and Yamaha by creating an e-Drum product that is better (in touch, look, and sound), and which is completely different in style.

Now, we have e-Drum kits like the Classy Series Custom Plus 9SR, which are the best digital drum kits worldwide for drummers who wish to seamlessly transition from the practice room to a real drum kit at a live performance or concert.

XM World e-Drums and Mesh Heads are sold globally, but still designed in Taiwan where our main factory has been located since 2004, whereas our main competitor 2-Box has only existed since 2008. Our revolutionary XM Evolution Mesh Head Drum Skin system can turn any old drum kit into drums that have amazing sound quality.

We have a large number of employees working in a number of countries, but deep down we are a family-based organisation. This is the Taiwanese way. I live in the factory, which is great for inspiration, as my ideas can go right onto paper. My best friend Alex Ku is the Chief Electronic Engineer, and a number of family members work either in our factories or overseas in marketing and distribution.

XM World is already a popular brand in Asia, where housing has been high density for a long time, but we are now reaching a wider global audience. We have distributors in Australia, Germany, Russia, France, Brazil, the United Kingdom, Ireland, Israel, Turkey, Poland, New Zealand, Panama, and of course in Taiwan, China, Korea, Malaysia, Thailand and Singapore.

If you love drums and have yet to try out an XM e-Drum kit or XM Evolution Mesh Head Drum Skin system, a world of opportunities truly awaits you!